There is something both thrilling and terrifying about that moment when waking slips into sleeping, when watching drifts into dreaming, and when the veil that separates the imagined from the real blows aside so that we suddenly cannot tell one from the other.
If a spider happens to be dropping from the ceiling on a long, black thread of silk at that magical instant, who knows what we might dream… 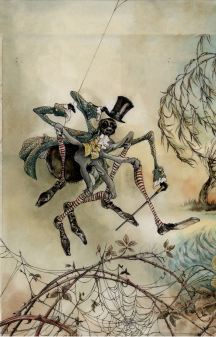 Tonight, as you snuggle up warm in your bed
With your eyes nearly closed, cotton wool in your head,
A spider drops down from the ceiling above…
He’s wearing a top hat, striped socks and one glove!

Crawling over your pillow, the spider creeps near,
And whispers what sounds like a spell in your ear:
‘I am the Dream Weaver, as strange as it seems,
Not spinning my webs now, but weaving your dreams!’

Your blankets grow cobwebs, your bed legs grow roots,
And your curtains sprout mistletoe, thistles and shoots,
As the spider swings by in his gold-buckled shoes,
Shouting: ‘Quick! Follow me! We have no time to lose!’

Your head starts to spin and you slip from your pillow
And fall through the leaves of a sad weeping willow,
Who weeps as his whiskers are hooked on the reel
Of a hunch-backed old toad at an old spinning-wheel.

With whirrs of her wheel, and a nod of her head,
The old toad spins a waterfall wave of white thread,
Which coils like spaghetti on trays held by waiters –
Who look just like beetles in tailcoats and gaiters.

With trays piled high from the white-cotton fountain,
The beetles climb over a tortoise-shell mountain,
To bright-coloured rivers where rainbow trout lie
And chameleons’ tails stir up ponds filled with dye.

Each beetle dives into the pool of its choosing,
In which a chameleon keeps the dye oozing,
Selecting its pattern by changing its skin
From zig-zags to polka-dots, thick stripes to thin.

In one pool, a rubber-gloved frog feeds a tangle
Of nettles and weeds through the jaws of a mangle,
While crickets with nutcrackers squeeze a French bean,
And the thread turns from snow-white to gooseberry-green.

In the next pool, a hairy-legged bluebottle settles,
And tears up a heap of forget-me-knot petals.
He wrings them together and gives them a chew,
And the thread turns from milk-white to blueberry-blue.

Purple plums dropped like bombs by fat moths in fur capes
Stir a pool where a centipede slowly treads grapes
On a waterwheel turned by his one hundred shoes,
And the thread turns the shade of a freshly made bruise.

The threads are now lifted on dragonflies’ tails,
Silhouetted like bi-planes with long vapour trails.
Into clouds made of dandelion flowers they swoop,
Tying knots in the threads while they’re looping the loop.

Flying up from the dye-ponds, past mushrooms and weeds,
Diving down through a storm cloud of sycamore seeds,
Taking turns through the creepers, the vines and the brambles,
The rainbow-tailed, dragonfly flying squad scrambles…

3 thoughts on “The Dream Weaver”